South African Candice Lill and her German partner Adelheid Morath became the Queens of the Queen Stage when they won the 100km Stage 5 from Oak Valley Estate to StellenboschUniversity on Friday.

The Summit Fin pair were able to temporarily halt the victory march of the Investec-songo-Specialized team of World Champions Annika Langvad and Anna van der Breggen who had convincingly won every other day of racing.

Lill and Morath finished the stage in a time of 5:20:42, just over four minutes ahead of Langvad and Van der Breggen, with Silverback-Fairtree’s Jennie Stenerhag and Mariske Strauss finishing third, seven minutes further back – despite a big crash for Strauss when a rider went down in front of her near the finish.

Going into Saturday’s and Sunday’s final 159km of racing, the Investec-songo-Specialized duo still hold a 21-minute lead over Lill and Morath with Ariane Lüthi and Maja Wloszczowska (Kross-Spur Racing) third, another 30 minutes further back.

Lill and Morath broke away with the race leaders soon after the start and at the first water point the two teams had already established a significant lead over their rivals. Van der Breggen then crashed and punctured which meant the South African and her German partner were able to build a two-minute lead at the halfway point.

With Van der Breggen struggling to get back into a rhythm after her crash and the compulsory portage down the Gantouw Pass, Investec-songo-Specialized opted to ride a steady pace and minimise their losses. Their decision to back off from chasing the stage win allowed Summit Fin to double their lead to the finish.

“It was very hard out there today,” said Lill after the finish. “Those little bumps on the route profile never seemed to end. It just felt like non-stop climbing today.

“Anna had a crash in front of me on an early descent and we got a gap and then just kept it steady until the end.”

The South African was very pleased to have made it a double win for South Africa, in both the Men’s and Women’s categories, on the Queen Stage.

“The spectators were amazing out there … they really got me through today. It is awesome for South Africa with Matthys Beukes and Philip Buys winning too. With Stellenbosch being a cycling hub for South Africa, there were so many spectators out there – I got tears in my eyes with them all shouting for me.

“We did not expect to win the stage. We knew the climbing suited us, but Annika and Anna are a pretty formidable pair, so to pull off this win is pretty special.”

Van der Breggen had no obvious reason for her struggles after the Investec-songo-Specialized dominance before Friday.

In the race for the Absa African Women’s Jersey, Theresa Ralph and Sarah Hill of team Galileo Risk finished the stage as the sixth women overall and maintained their big lead in the competition.

Saturday’s penultimate stage starts and finishes in Stellenbosch and sees riders complete an 89km out-and-back course on the trails around the historic town.

Annika Langvad and Anna van der Breggen (Investec-songo-Specialized) dispelled any vague suspicion that they were fading as the strongest Women’s category team at this year’s Absa Cape Epic with a clinically dominant performance on Saturday’s penultimate Stage 6.

After the pair of World Champions was surprisingly beaten into second position on Friday’s Queen stage, Langvad and Van der Breggen snatched their crown back on Saturday with a trouble-free ride in the 89km stage which started and finished at Stellenbosch University. They crossed the line almost nine minutes ahead of South African Candice Lill and her German partner Adelheid Morath (Summit Fin), the winners of Friday’s Stage 5.

The result leaves Investec-songo-Specialized holding a massive 30-minute lead over Summit Fin with just the final 70km stage remaining. Ariane Lüthi and Maja Wloszczowska (Kross-Spur Racing) crossed the line just under two minutes behind Lill and Morath and consolidated their third position overall, but are now more than an hour behind the leaders.

Saturday’s penultimate stage quickly turned into a procession as Van der Breggen turned up the pace on the first climb soon after the start.

“Based on experience from yesterday, we figured that we ride better when we can get away and get a gap quite early,” explained Langvad after she crossed the line on Saturday. “We chatted about it and decided ‘That might be a nice plan’.

“I said: ‘Anna, the final decision is up to you, it depends on how you feel,’ – and she just went!” said Langvad, before adding with a giggle: “And so I thought, ‘Now I just have to follow her pace’.”

Van der Breggen said she felt a lot better after struggling on Friday.

“Today was way better than yesterday. I do not know what went wrong yesterday – I had a bit of stomach problems and there were maybe just a few small things that all just combined to make me feel not so good.

“I liked the route more today. It was beautiful single track today and the climbs were a bit less steep, which suits me better. We had a good pace all day today.”

For the first time this year the pair seemed happy to agree with what everybody else has been saying since the opening Prologue almost a week ago: Investec-songo-Specialized will win the women’s category.

“I think we can do it … I hope so,” said Van der Breggen before the normally conservative Langvad chipped in and added: “I believe in us too … very much.”

Although Langvad did qualify her confident prediction: “Tomorrow is normally not as tough a day, and it would take a lot of mechanicals for us not to win … but nothing is for sure!”

In the race for the Absa African Women’s Jersey, Theresa Ralph and Sarah Hill of team Galileo Risk finished the stage sixth overall – the sixth time out of seven stages they have claimed that position – and they now virtually just need to finish on Sunday to claim that title.

Sunday’s Grand Finale stage takes riders from Stellenbosch University along the Trails to Val de Vie for the Champs-Élysées of the Absa Cape Epic. The 70km route is relatively short and the podium positions look settled, but there are pitfalls which could still create a final twist.

Annika Langvad and Anna van der Breggen (Investec-songo-Specialized) collected their seventh stage win at the 2019 Absa Cape Epic to give Langvad her fifth victory in the gruelling eight-day race.

The Investec-songo-Specialized pair established their superiority on the opening Prologue on the slopes of Table Mountain National Park a week ago and never looked like being headed throughout the eight stages around the Western Cape. Even when Lill and Morath pounced on the chance of a stage win on Friday, when Van der Breggen was having a rare off day, it always looked like nothing more than a temporary setback for the dominant race winners.

In the 70km final stage from Stellenbosch University to Val De Vie Estate, Lill and Morath ended just 17 seconds behind but were over 30 minutes behind on GC. Ariane Lüthi and Maja Wloszczowska (Kross-Spur Racing) finished third on both the stage and overall standings.

Langvad was surprisingly calm about collecting her fifth win and matching the record of Absa Cape Epic greats Karl Platt and Christoph Sauser; her focus was rather on Van der Breggen and her first victory.

“The Absa Cape Epic is always so intense, the ups and downs … it has been so emotional this year. It has been such a good week and I have really enjoyed riding with Anna and forming a new partnership. It has been a blast.

Van der Breggen looked relieved to have completed what she believes to be her biggest ever week on a bike.

“It was a really tough week. It was such a new experience and so nice to do something totally new and see the boundaries where you can push your body.

“Sometimes I did not like the suffering, but it was such a nice thing to do. I do not think my body has ever been this tired and I do not think I have ever spent so many hours on the bike in one week. It was hard at the beginning, but now I know how it feels to achieve what we did.”

And what will it take to beat Langvad, who has now won all five times she has started the Absa Cape Epic?

“I don’t know” she said with a smile – and it seems her opponents don’t know either.

In the race for the Absa African Women’s Jersey, Theresa Ralph and Sarah Hill of team Galileo Risk comfortably completed the stage in sixth position, the same place they ended all week, winning the Jersey for 2019.

Early Bird Entries -which sell out instantaneously each year - for the 2020 Absa Cape Epic will open at 15:00 South African time (GMT +2) on Monday 25 March on www.cape-epic.com 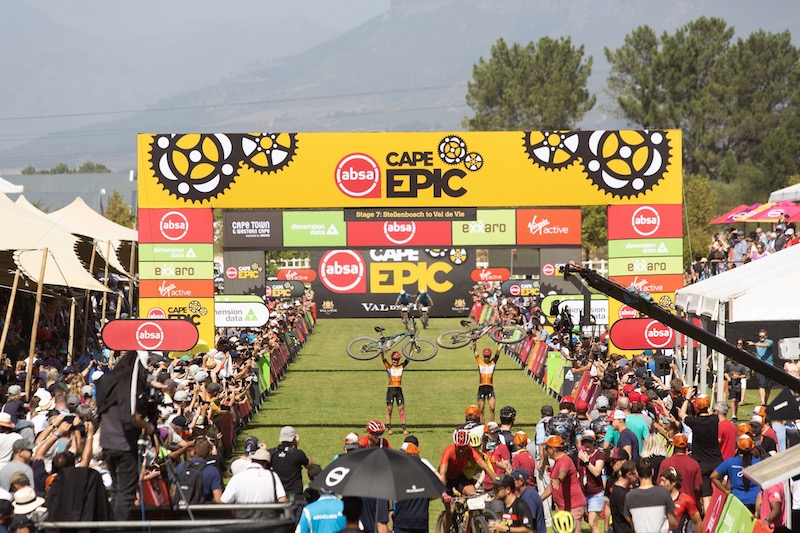 Langvad and Batten Sensational on Stage 1 of the Swiss Epic

Pursuit Challenge: Sarah Hill Rules Them All in the Women's Pro Race